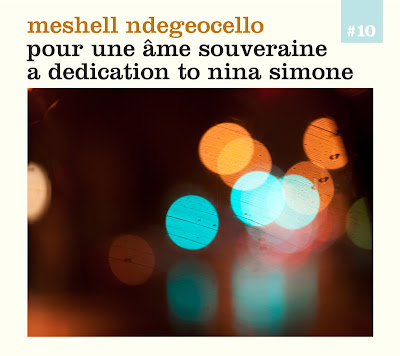 The gift that Nina Simone gave is a voice-spirit that lives on autonomously and continues to revive itself through films, soundtracks, and album tributes.

Meshell Ndegeocello’s, Pour Une Âme Souveraine: A Dedication to Nina Simone, exemplifies the Simone Renaissance Era with a vocal restaging of songs on this 2012 album tribute.

Known as a singer/songwriter, bass player and multi-Grammy nominated artist, what ranks above Meshell’s titles is a distinction that permeates her work and explains how a bold standard like “Four Women,” can shift to a gentler assertion and hold its own.

Cementing a three-year lead on the resurgence of Simone’s recordings, Ndegeocello speaks with me about her 10th album, being called a genius, and the film she’s currently scoring.

Interiors of Man:  Many singers have performed renditions of Nina Simone’s “Four Women,” mirroring the same emotional intensity that Simone brought to the song.  Your rendition on Pour Une Âme Souveraine, is softer but striking, sans the anger and deviates with a silent ending, adding more.  You indicated on NPR that in doing this, the song captures a universal audience.

Meshell Ndegeocello:  The silence is a way to acknowledge all who have experienced the effects of their color and sexism. Sometimes what you leave out is the strongest message.

IOM:   You also mentioned in the interview that you’d like people to learn from Simone’s life.  What’s the most valuable lesson you hope others will gain?

MN:  As a musician, I hope other musicians can see the effect of one’s choices, for good or bad. A lot of a career can be because of the industry but it’s important to see and acknowledge the consequences of our own decisions, accommodations, resistance.  I also hope people learn from her dedication to music and to social activism. And sadly to also see the effects of alcohol, drugs and mental health issues - all brought on by many factors.

IOM:   The word bitter seems to serve you in a paradoxical way, that is, you made an album entitled Bitter that’s enthrallingly tender; and on your website you host a Q&A on Bitter, alluding that you’re not upset about Bitter being overlooked for best album, but you’d rather focus on creating more music.  It seems that extracting or diluting the aggression and bitterness from a song i.e., “Four Women,” and replacing it with a tender tone gives rise to some of your best art.

MN: Thank you.  It’s wish fulfillment really - I wish it were as easy in life to replace painful experiences by a beautiful melody but I try to remind myself of the possibilities with the music, if nothing else.

IOM:  The Huff Post has described you as a genius.  Where do you find the [cynosure] of genius whether it’s in your work or another’s?

MN:  I honestly don’t entertain these topics; when i listen to music or take in another art I truly give in to the act of experience.  I am not a theorist, it’s flattering, but I reserve that adjective for Henrietta Swan Leavitt, Nina Simone, Tiya Miles & Ornette Coleman.

IOM:  Where are you now in your musical journey, and do you foresee your next project?

MN:  I have been presented with the opportunity to record for the label that has allowed me great freedom, but if I make an instrumental project the budget is much lower than if I make a vocal recording and that fascinates me. I find myself just enjoying listening to records and at this moment I am scoring an incredible documentary about a young man’s experience of migrating to Grenada. I am also having an inner dialog about the American experience and how it can lead some to leave and seek the warmth of other suns. I suppose the same thing can be said of genres, no?