Dedicating the month of December to the Honorable, Nelson Mandela, my encounter with him was only through movies, the media, and a recollection of once telling an old friend that the dictionary should bare a picture of Nelson Mandela next to the word integrity.  He earnestly agreed as we sat in silence admiring his unwavering convictions, while nearing his 27th year of imprisonment.


Thinking about Mandela’s integrity provoked a sober examination of loyalty to a cause in context to choosing imprisonment over the renunciation of one’s ideas in exchange for freedom, as everyone knows the silent answer to this examination of themselves.
Written by Yvonne Grays Nathane


“Without language, one cannot talk to people and understand them; one cannot share their hopes and aspirations, grasp their history, appreciate their poetry, or savor their songs.” 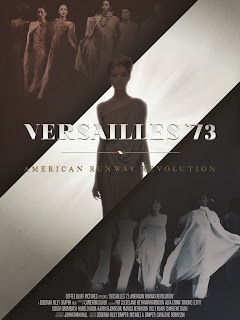 For some, the ‘70s bring to mind the disco era of Donna Summer; Manhattan’s hottest night scene, Studio 54; Mahogany, starring, Diana Ross; and those Bob Mackie originals worn by Cher.


While these and other trends were indicative of ‘70s American culture, a fashion revolution was emerging across the globe, known as Versailles ’73.

The production footage on Laura Mvula’s, Green Garden, unveils the inspiration behind the video treatment based on Mvula’s childhood exposure to greener surroundings.

From this back story, a cinematic vision unfolds, paralleling transcendent views of nature, deserving of man’s praise.

Links to Excellence – "I Can Explain"

There are two songs that I can definitively claim as top favorites, one of which comes from a voice that embodies artistic style with an emotional range that moves . . .

Great fashion is timeless; moreover when it’s driven by global service and efforts to empower the youth through fashion, as United Colors of Fashion dedicates itself to.


Highlighting the best at the end, here’s an inside look at UCOF’s mission to go beyond the aesthetics of fashion during the 2012 events of this charitable organization, along with added images from their 2013 Annual Gala, entitled, Faith Hope Fashion.

Driving through one of Chicago’s toughest neighborhoods – coming from the vehicle of a man whom many would assume a loyal fan of hard rap, based on his attire and early model ride – I heard an impressive version of a British pop song with the singer’s intermittent vocals fading in and out over lush instrumentals, creating an extended, soulful remix.  The musical effect was charismatic, as it inspired my interest in the song, which I have yet to hear anywhere else.

Soon after this encounter, I came across another vehicle blasting explicit rap lyrics, which I'd assumed to be coming from someone fitting the above profile, rather than what I saw after daring to look – preppy vehicle, driven by a clean-cut young man reflective of college status.

It’s common to assume that certain demographics gravitate to certain genres of art without consideration for the “individual” marketing dynamics that play into the marketing equation, based on individual tastes and/or personal experiences.


As we are becoming a more globalized society, the standard demographic models used to define target markets will increasingly have to take the individual approach into account, predicated on the complexities of global interests, personal tastes, and consumer sophistication.
Written by Yvonne Grays Nathane

Links to Excellence - Another Black & White with indigo jam unit

Moved by the artistry of indigo, this black & white performance is hauntingly engaging with a resolute bass groove, mediating drums, haunting piano notes, and jamming percussions adding rhythmic variations to the semi-haunting melody.

Nothing brings the artistic allure of black & white together like a visually filmed performance with cultural synchronization.

How far should one go in writing?  Should one go as far as the imagination allows on a fictional platform that’s partly safe from hurtful realities, yet vulnerable to critical attack from having gone to disturbing depths?

What are the emotional effects in diving to such depths for a writer, though it may seem as if it were no problem to create what the writer imagined … gasp-reactive content that disturbs to ridicule.  These questions have been in my mind for years after an introduction to the works of Norman Mailer, upon viewing the movie adaptation of a memorable scene depicting scandalous adultery and raw emotions, as a man witnesses his mate’s blatant infidelity and attack on his humanity.

Instantly I became gasp-reactive while feeling the emotional anguish the character displayed as though it were my own.  I then wondered who the writer was, and further thought what courage it actually takes to write such material regardless of its context.

Though indelibly disturbed each time I think about the scene, as a writer, I respect the guts that it took for Mailer to write what he wrote, and the artistic resolution required in taking such risks.

While brave writing can disturb, it also affords writers the freedom to explore powerful emotions in having the courage to experiment, examine, and write from imaginings that can incite at the human core.

Mailer had the personal attributes of what it takes to be a great writer – verve, fire … relentless heart and Pulitzers for his former works, attesting to his skills.


With heart, I also believe it takes a visceral type of passion to pen what might unknowingly become a brilliant work of art without reserve of criticism, as it were with such diversely distinguished writers from Nathaniel Hawthorne, to living playwright and author, Ntozake Shange, whose greatest works received initial backlash prior to wide acclaim.
Written by Yvonne Grays Nathane

Deciding and knowing who we are comes with an intuitive urging to proclaim and step into our calling.

In this Links to Excellence, Author, James Salter discusses his decision to become a writer.

The Beauty of Being Real

There was a fascinating statement that Actor, Viola Davis made in the televised discussion of Black Women in Hollywood where she alluded how Black writers often “image-censor” their characters before pen is placed on paper, cautious of creating characters that might offend.

Her argument suggested what true art is – how it actually becomes real through characters that are perfectly flawed and depicted through the extensions of their blemished lives without excising the ugly imagery that can tell powerful stories.

The exact statement that she made compelled me to think how we, ironically as humans, equate perfection with beauty, thus if anything is imperfect and flawed to the precision of our humanness, we are then ugly misprints of our inevitable truths, deserving of shame, ridicule, and an evasive cover up that strips away our substance.


The overall irony is, our flaws make us beautifully human, as our flaws, issues, and mistakes connect us all with an inseparable need for each other.
Written by Yvonne Grays Nathane

Links to Excellence – James Baldwin: The Making of an Artist

Experiencing an artist’s work that is loved so deeply can make one assume they’ll equally love everything created by the artist, till coming across a work that refutes the assumption.

This is simply what makes an artist an [artist] – one who does not placate to others’ expectations, but to the integrity of self-expression.

Baldwin was an artist-writer who ensued new creations of self-expression, as the following link illustrates.

Links to Excellence – The Making of “The Door” by Ava DuVernay

Working with luxury fashion brand, Miu Miu, Award-winning filmmaker, Ava DuVernay, provides a behind-the-scenes look at The Door, featuring established and upcoming actors, portraying the essentials of self-love, resilience, friendship, and staying committed to one’s passion, as the short culminates with a lyrical performance by Goapele and wisdom shared by Alfre Woodard.  Along with Woodard, The Door stars Gabrielle Union and additional cast members, Adepero Oduye and Emayatzy Corinealdi.

Links to Excellence - Dare to Dream

The first post I penned for this site identified TV and Internet series that examine the human ability to achieve one’s dreams.  Links to Excellence is my recommendation of various sites, featuring sources of inspiration and/or artistic performances I find exceptional.

Continuing with the topic of dreams, below is my first recommended link, featuring an inspiring video on following dreams.

Excellence is the New Avant-garde

There are only a few TV and Internet series that I give precious time to.  Among them are stimulating programs with highly informed artists who step away from the glitter of their careers and credit their achievements to the inner accessions of their calling, and the miraculous rewards that manifest from following their life’s mission with unwavering persistence and belief.

With all the distractions of pop culture and modern media, hearing someone speak from their soul and question ideals that need questioning, captures and engages one’s attention with a connection of human understanding.

It’s enriching media that nourishes the soul with invaluable advice that can urge one to stay the course; confirm the infallibility of a chosen path; or encourage dreams in the midst of doubt.

I have come across this enrichment via the web and TV, recently viewing Ken Burns discussing the importance of perseverance on Mediabistro, and from discourses on Oprah’s Master Class, and The Conversation with Amanda de Cadenet.

As excellence is becoming the new avant-garde, what was once considered normal expectations and assumed standards of quality programming is now being sought after and celebrated when found.

Great programs and excellent content – a rare art with the influx of popular programming – is now “the bar” that makes those who are seeking excellence satisfied when found.

Of course there’s a market for everything, as consumers have the right to indulge their tastes, yet when commerce and popularity rules, excellence can become a marginalized treasure, next in line to redeem its value after what has replaced it loses its following.

Still in the end, compelling “docu-series” and interviews, featuring accomplished individuals sharing their paths to success are vital productions that examine the human ability to achieve one’s dreams.
Written by Yvonne Grays Nathane